It’s that time of year again, folks. You know, the one when it snows, is very cold and we have to dig out our woolen mittens, scarves and boots. In my house, which does not have a furnace (for those of you who don’t know, it’s “earth-sheltered”, we were Green before it became popular), we heat with firewood. And, I do have to admit, since we have grown older and more arthritic, an occasional electric space heater. Heating with wood has definite advantages. For one thing, we secretly laugh when we hear what our more conventional friends pay for oil every month. For another thing, it’s cool to watch the fireplace (the original “boob tube”) and can be romantic as well!

But there is no getting around the stacking of the cord that we buy for the winter. Oh, of course we could pay the guys who deliver the wood to stack it, but years ago (when the fireplace was first installed) I said, “I’ll do it! After all, it’s just another form of exercise and instead of working out at the Y, I’ll work out AND accomplish something practical.”

The cord is dumped in our driveway.

That first year, I thought I needed to stack the entire cord in one day and proceeded to do so. I spent the rest of the evening in a hot bath with sea salts and a valium.
Every year since then, I treat my aging body more kindly. I stack for no more than an hour and a half a day, taking a 10 minute break to sit down and drink some water.

One-half of the outside holder for the wood.

Very little thinking goes into the chore and I have plenty of time to contemplate my surroundings, nature, moral questions and any other thoughts that enter my head. It’s quite peaceful. I treat the placement of the logs as I would a jigsaw puzzle.

Left photo: after an hour and a half; Right photo: Left side finished!

After an hour and a half. 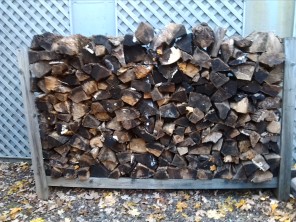 Finished the left side!

There is rhyme and reason to the location of each piece of firewood; sometimes I put some pieces aside for special placement and other times, I find thin shims to shore up an area for more stability. Weirdly shaped logs go on top of the stack.

Left photo: other side of the structure that holds the logs.  Notice the alternating logs on the far right to help support the stack.  Right photo: After second hour. 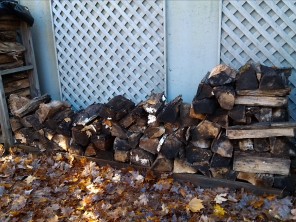 Right side of structure after an hour. Notice on right side I have to alternate positions for support.

Still working on the right side (it’s a little longer than the left side.)

I once had a skillful dentist, since retired, who spent about an hour doing some complicated repair. When he was all finished, he stepped back, examined his work and I could see the look of satisfaction come over him for a job well done. HIS job! I feel the same way about mine. 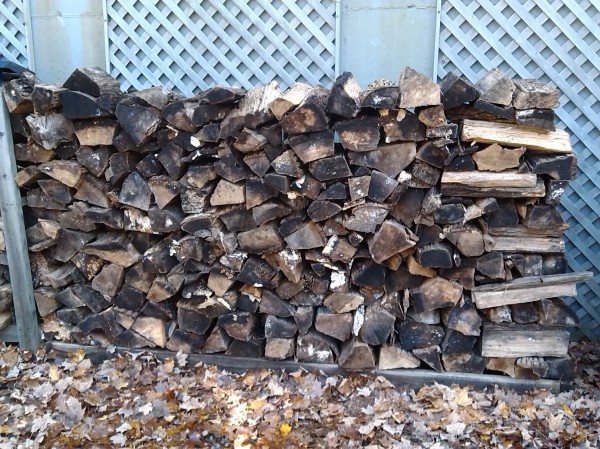 Right side finished. Now, I have to stack two holders inside (not shown!)