During the campaign for president, much was made of a crude comment by Trump 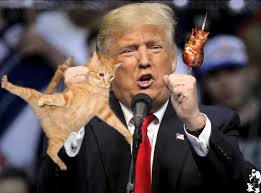 about grabbing women (do I need go further?)  The spin doctors tossed it off as “locker room talk” and some of us accepted the explanation.  This is not a blog about politics; those who know me well, know that I am neither knowledgeable nor interested enough in politics to get involved.  It is, however, a blog post on locker room talk.

You see, I work out at my local YMCA 3 or 4 times a week.  During that time, I hear a lot of women converse; I participate in many conversations and have benefited from smart opinions and advice.  I have never once heard a woman discuss grabbing a man’s crotch or, for that matter, even make sexual innuendos.  Here are a few conversations from my locker room:

Today, in the sauna, two women were talking and one (I’ll call her Pam) was telling the other (Rae) that a year ago she was diagnosed with pre-diabetes.  “The doctor said I

have two choices: to treat it or make some changes” said Pam, “so even though I wasn’t overweight, I went on to lose 25 pounds in a year.  I also researched eating better for my condition, cut out sweets, made sure I exercised regularly.”  Pam went on to say that for her, stress has to be kept under control and the exercise is a way to handle that.  “After a year,” Pam continued, “I returned to the doctor and discovered that I had full-blown diabetes! F-ck it, I said, I might as well eat a brownie!”

During Chanukah, I exchanged numerous texts with my adult children, both of whom

were in NY at that time (one visiting, one lives there).  I asked them to bring good NY latkes to me in CT for our Chanukah meal.  Of course, I discussed this with Nicky, a long-time Y friend, who said, “Why don’t you make them yourself?  They’re simple.”  “Too much trouble,” said I.  Another piped up with her “simple” recipe and several others compared notes on ingredients, ease of preparation, etc.  There was an animated discussion of whether to accompany them with sour cream or apple sauce.  I promised Nicky I would report to her on the NY latkes.  WELL! My children bought them from the 2nd Ave Deli at $6 apiece … they were good but I expected them to be coated in gold leaf.  When I saw Nicky and told her, she said, “Next time try Trader Joe’s.”

Finally, here’s a conversation I overheard in the steam room:

Toni: Did you hear about Debbie Reynolds dying the day after her daughter, Carrie Fisher?  How sad is that?

Kim: Yeah, I’ve heard about people dying of a broken heart.  I guess that’s what got her.

Toni: You see that happening in couples when they deeply love each other.

Kim: I haven’t seen too many couples like that.

Finally, I am reminded of the time I visited a fitness center in Sweden and sat in the sauna with other women talking animatedly with each other in Swedish.  I imagined all sorts of topics: the sexual exploits of the handsome and lithe

Swedish men, a new and improved bosom enhancement technique, fashion ideas for these beautiful blonde women.  When I got up the nerve to ask them in English what, if they didn’t mind, they were so engaged in talking about the answer was “diapers.”

Locker room talk?  Health, latkes, broken hearts and diapers! That’s what I hear in mine!

A Blog of the Ridiculous and Sublime, by Mark Sackler