What I Did on My Vacation

The Famous Statue in Sarasota

When I retired from teaching, my husband and I decided to find an ideal place to spend some time during the winter. This Shangri La turned out to be Sarasota, Florida. Not that we have any attachment to the circus (it is home to the world-renowned John and Mabel Ringling Museum), but it held other attractions that we both sought and fulfilled all the criteria we had talked about.  And…that Ringling Museum turned out to be fascinating! The first time we went there 3 years ago (we’ve returned to it each year) we figured it was good for an hour or two. We spent the entire day there. History of the circus, old circus posters, a fascinating video of the life and times of Ringling, a miniature circus 3800 square feet built by Howard Tibbals and comprised of nearly a million pieces in 1/16th scale … that alone is worth the visit! Not to mention the Ca d’Zan, the beautiful, opulent and elegant 36,000 sq. ft. home John had built for them on the water. The art museum (in a separate building) compares to some of the finest art museums in the nation.

Ca d’Zan – home of the Ringlings

Of course, driving down made us aware of the even lower gas prices in the south than in the north:

And … this wasn’t the Lowest!

One day, we went to an outdoor show featuring 1500 antique cars where the oldest was 98 years old. I should look so good at that age! Nothing restored; just its original upholstery, paint job, etc. It resided in a museum for several decades and was then cared for and coddled. It’s a 1918 Milburn electric (!) car:

Another day, the outdoors called us. We ventured to the Myakka River State Park that features a boat tour that would have been boring but for the guide, a stand-up comedian! Before we began, he said, “This is a tour where you’ll see alligators and birds. Look at that shore. See the alligator and the bird there? Tour over.” 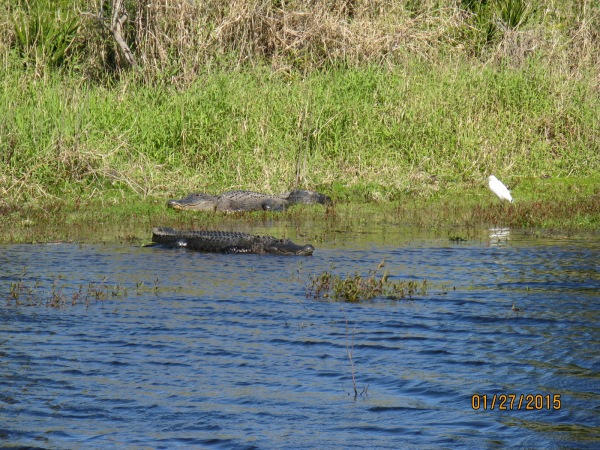 We biked to a bird rescue facility that treats injured or otherwise disabled birds that can’t be let out on their own. I loved seeing these beautiful creatures close-up because one rarely does. (On the Myakka tour, the guide would say, “there’s an osprey!” and before I could make it out, it flew away.)

The most interesting bird there was the pelican. One was actually on the outside looking in at his wounded brethren. When I asked a guide why he wasn’t in the cage like the others, she said, “Oh, he’s a wild pelican, looking for some free food.” 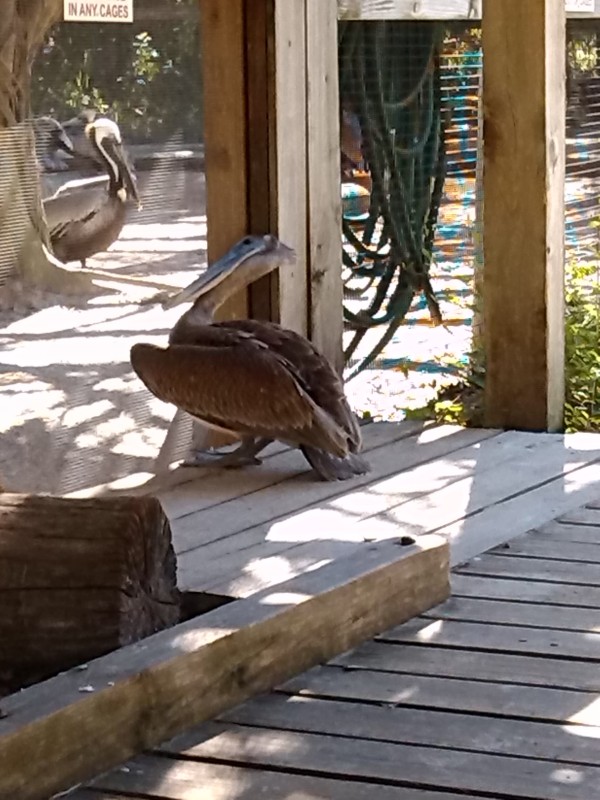 A Curious Bird is the Pelican!

The pelican made me remember a poem often erroneously attributed to Ogden Nash, but actually written by Dixon Merritt:

A wonderful bird is the pelican,
His mouth can hold more than his belly can,
He can hold in his beak,
Enough food for a week.
I’m damned if I know how the hell he can!

And what would a trip be without finding a misspelling? This one from a menu (check out the reuben — a double misspelling!):