Recently, my husband and I spent two weeks in Sarasota, FL, while our friends up north shivered in the bitter cold. Not that it was hot in Florida, but it certainly was better than snow and single digit temps.

We decided to drive down, taking a leisurely 5 days and sightseeing along the way. However, for our return trip, we decided on the Amtrak Auto Train. That was quite an experience.

Upon arrival in Sanford, FL, at 1:30 for a 4:00 departure, we checked in and a magnetic number was

affixed to our car — #308. We got the tickets that were previously purchased, and chose a time for dinner. We were told that there would be a wine and cheese party in the Lounge from 3 to 4 for passengers who, like us, had sleeper rooms. At about 2:30, we boarded the train, settled in, and headed to the lounge where a party was in full swing. Wine flowed, cheese, crackers, veggies and dip were complimentary and we sat with a lovely couple with whom we had a nice rapport, even though they were a generation younger than us. We said we’d meet again for dinner and share a table, which we did. We all got loaded (who’s driving?)

One of the seats in the compartment

Before dinner, we sat in our compartment, which had two bench seats, some pillows, towels and water bottles. Not much room for anything else. Cozy. Some might say claustrophobic. Just before dinner, the other couple passed our roomette and we shared vodka shots (who’s driving?) and proceeded to a graciously served white-tablecloth dinner, again with more wine being poured.

At 9, the porter magically transformed our two benches into two beds and now we were really spatially challenged. I had the upper, which required agility and sure-footedness to ascend and descend (like in the middle of the night when I had to 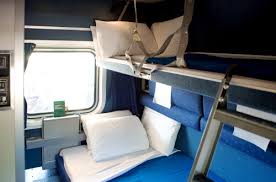 An Upper and a Lower

use the bathroom at the end of the car). The train lurched and rocked throughout the night, but I managed to sleep until the announcement at 7:00 that breakfast was served.

Upon arrival in Virginia, we took a seat in the waiting room to hear our car number called so we could drive off. There were only 135 autos on the train (our number of 308 was a mystery to me) and when they started to call “1, 2, 3, 4,” I thought we were doomed, but soon they continued with “10, 53, 137, 278” and we realized the numbers were absolutely random. Whatever magnetic number was next on the pile, that’s what was put on your car.

It took an hour for them to call 308; we got in the car and drove home. A very pleasant experience that saved us 900 miles of driving and afforded us the luxury of getting as drunk as we wanted because, after all, who’s driving?