Let’s Hear it for the Couch! 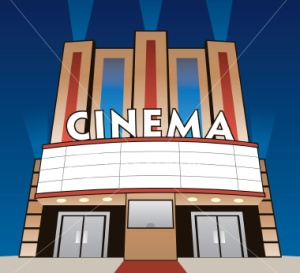 Recently, a local newspaper columnist extolled the virtues of going to a movie theater.  Among the reasons he cited were to “get out of the house” and to “see the flick while people are still talking about it.”  I couldn’t disagree more.  Here, in no particular order, are some of the reasons that I’m a DVD viewer in my own home:

2)    Moviegoers who are inconsiderate, rude and noisy and decide that there’s nothing wrong with using their cell phone or having an ongoing dialogue with their companions or with the characters on the screen.  Since when did this activity become audience participation?

3)    Why be forced to eat overpriced, stale popcorn, when at home, I can freshly prepare and

eat popcorn of my own choosing (light? Butter flavor? Low fat? No salt?) for about 30 cents.

6)    In the theater, you can’t pause the movie to make an astute comment to your companion or to ask a critical question of plot development, not to mention:

8)    Adjustable sound level.  Just who is the average viewer that the movie houses are adjusting for?  If the sound isn’t blasting away at the decibel level of a jet plane approaching a runway, it’s so low or muddled I wonder if I truly am going deaf (no nasty comments).

10) Those in-house commercials for the snack bar, no smoking, quiet, etc. are not what I’m paying my money to see.  I was once in a theater where they had the chutzpah to pass around a basket for contributions for something or other related to the film content.

So, I’ll stick with Netflix, thank you very much.  It’s the best thing since Bon Bons (anyone remember those?)