For those of you who have kept up with my baby robin adventure, this will be a recap.  For others, it is a story I hope you find interesting.

The day before Mother’s Day, I happened to hear lots of commotion … flapping wings, bird chirping, etc., beside a small potted evergreen tree I have in my courtyard.  Truth be told, the tree is half dead with leaves only on one side of it.

I looked in and discovered a robin’s nest with 4 bright blue eggs! I googled answers to my questions: how long for the egg to hatch? (12-14 days); how long until the baby would fly (12- 14 days); by coming close would I cause the parents to abandon the nest? (no); what if one fell out? (if it was newly hatched, or a nestling, put it back, but if it was a fledgling – learning to fly – leave it alone to fend for itself).

The following day … Mother’s Day! I saw 3 newly hatched babies and one reluctant one still inside his egg.  I was very excited to witness this and even more excited about following the progress of the babies.

Every day I slowly made my way up to the tree, walking along a ledge alongside it and poking my head in.  If either parent was sitting on the nest, I didn’t approach.  If they were away, they were not far and made their presence known to me.  They were on a tree branch nearby, watching that no harm came to their babies.

Every morning after I rose, I went outside to check up on their progress.  They got larger, grew feathers and finally opened their eyes.  I’d lean in with my Smart Phone to snap their photo, being careful to not disturb the nest and to be as quick as possible so as to not upset the parents who would chirp their warnings at me.

Throughout the day, I watched first the mother, then the father, bring food for the babies to eat.  It seemed like the babies had their mouths open all the time, waiting for some morsel to be dropped in.  My local visiting cat came too near the nest once and I ran out to shoo it away. 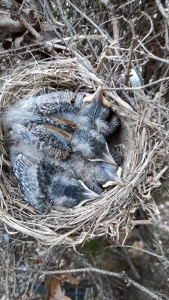 And then … I saw a large black crow swoop near the nest.  I also watched a blue jay do the same.  And, so, I googled: What are the predators of baby robins? (Raccoons, snakes, crows and jays.)  OH NO!

On May 20, I woke up, took a look and saw my 4 babies safe and happy.  I showered, ate breakfast, tidied up the house, and made my way outside where I peeked in again.  The following 2 photos tell the story. 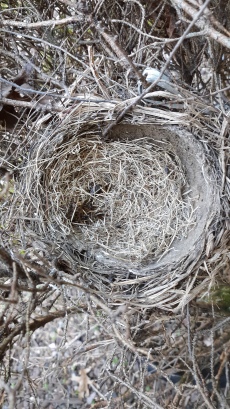 I can’t google the why, I can only imagine, and what I imagine is that the crow swooped them up in its claws and dropped one on the ground.  A sad story that was not easily dismissed from mind as I went through the day….