I never considered pizza to be a real meal.  My mother never served it for dinner (neither did we ever have peanut butter and jelly in the house) and it was always thought of strictly as a snack.  One that I wasn’t particularly fond of.  Friends would go out for pizza and I would order a salad.

Then, about 35 years ago, one of my husband’s friends introduced him to the Colony Grill in Stamford, also known as “Jimmy and Bobo’s”, home of the hot oil thin-crusted pie.

He was hooked and often ate lunch there.  And then he wanted me to go with him.  “Uh, uh,” I said, “pizza’s not my thing.”  He knew that our son, Lewis, would like it so … here’s the crazy part:  I would drive them both to Stamford (20 minutes away from Westport), they’d pick up their pies and eat them in the car.  When I got home, I had a “real dinner.”

Now, when Lewis visits from CA, a night for Colony Pizza is always planned in and looked forward to!

Somewhere along the way, I decided to try it.  One bite and I was hooked.  I never looked back!  On our second visit, I asked the waiter if I could bring in a salad to eat along with the pizza to make it into what I would consider “a real dinner.”  After he finished laughing at me, I stopped asking and ate the 12” pie for my meal.

Walls are lined with photos of servicemen; police and firemen who come in leave their department patch that is then put on display.  There are hundreds of them.  It’s an Irish bar honoring our men in uniform.  And pizza is the only food served. 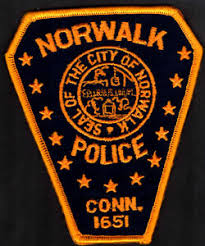 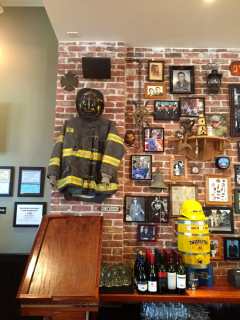 12 toppings are offered, plus  the recently added Salad Pizza.  Which I never ordered.

About 8 years ago, enterprising businessmen opened a new Colony Grill in Fairfield, only 10 minute from our house so we started going there.  We noticed many people who had migrated from Stamford and greeted them warmly.  We made friends with our bartender, Frank, an aspiring actor, and have attended all the local shows in which he has acted.

Now, there’s one in Norwalk and that’s our go-to spot. Recently the Colony was decorated for Halloween: 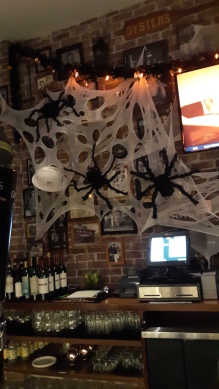 Halloween at the Colony

Colony’s is the only pizza I will consistently eat.  Sure, we’ve tried others when on vacation and desperate for a Friday night fix, but others pale in comparison.  Connecticut seems to be the home of the thin-crusted pie, but no one comes close to the Colony as far as we’re concerned. Taste, texture, sauce, just the right amount of spices, and served in a friendly, welcoming family atmosphere.

One innovation is their breakfast pie: sausage-egg-and-cheese and bacon-egg-and-cheese served on weekends only. Never had one.  Don’t think I’ll try.  I’ll stick to the pie I’ve been eating for the last 25 years: onion, well-done, thanks! 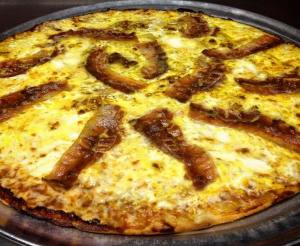