A Woman, A Bike, A Tale with a Happy Ending

Out on Fire Island, there are no cars or other land transportation. To go from town to town, one uses a water taxi for long distances or walks along the beach.  But within each town or to neighboring towns, the bicycle is the best way to easily get around.

I mostly use the bike for exercise since there is no fitness center available and the only sport, tennis, is one that I do not play. So each morning, I take a vigorous one-hour bike ride from Fair Harbor to Dunewood and then on to Kismet, broken up into 45 minutes, a break, and 15 minutes.

One particular morning, during my break in Kismet, I rested the bike on its kickstand and it fell over, causing the wheel, fender and chain to rub against each other.  I couldn’t ride it.  A young man I asked for help had no tools and suggested I go to the guy who rents bikes.  When I went to his house, he said, “I rent them; I don’t fix them,” but helpfully suggested I see “Joe who fixes bikes.  He’s next walk

over and 2 houses down.”  Joe wasn’t home but there were some construction workers on the path and one gave it his full attention for about 10 minutes but to no avail.  He said there was a “bike fixer” on the corner I could try.  In the house of the “bike fixer” were 2 women and a man who told me the one who repairs bikes is not there.

My last hope was that the kind men at the fire station would do something for me.  Unfortunately, it’s a volunteer fire dept and no one was there. 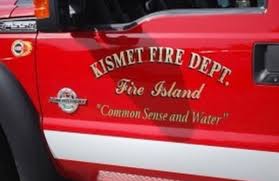 Resigned to having to basically drag the bike a mile back to Fair Harbor, I gave one more try and asked other construction workers across from the fire station.  One said, “Here comes my boss, he’s the mechanic.”

Sure enough, the boss, who began as a bike repairman 30 years ago in Kismet, turned the bike over, got a wrench from a workman, and I was on my way!  Such is the level of helpfulness … not one person ignored my plea; everyone gave it a good try, and all out of the goodness of their hearts!