Henna and Samosas and Yarmulkes, Oh my!

I am certain that most of my readers have attended a Jewish wedding ceremony, but how many have ever attended a Hindu one?  How about a combination Hindu/Jewish? I never did … until this past weekend and let me tell you, it was fabulous, educational, exciting and beautiful!  It took place in Cleveland since both the bride and groom are physicians at Cleveland Clinic.  I was invited by the groom’s family, the Jewish side. For privacy sake, I will not use actual names or photos (except the one of my henna’d hand.)

The weekend began on Saturday evening with a fun-filled party called Sangeet. Most people were outfitted in traditional sparkly and colorful Indian clothing, even those from the groom’s side.  Everyone looked splendid!  I sat at a table to get a beautiful henna design on my hand.

Many groups came center-stage to sing and dance, along with the traditional toasts to bride (whom I’ll call Sahana) and groom (I’ll call him Rick).  A luscious array of food choices followed including some I recognized, like chicken masala, sag paneer and gobi but others were new and delicious.  There was a chef who was making dosa (flat pancake) and of course I tried that as well.  I was confident that if anyone needed the Heimlich, there were plenty of doctors in attendance who would come to the rescue!  This ended at 10 pm, but we left a tad early because …. 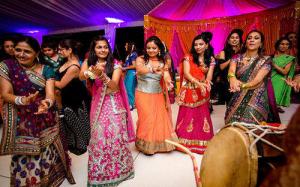 On Sunday morning, the Baraat ceremony was held at 8:30 am.  Outside the hotel, weather was cold and overcast, but thankfully not raining.  Rick arrived in a carriage pulled by a white horse (often the groom himself is on the horse) to great cheer and merriment, while the bride’s side waited inside the hotel for his arrival.

Dancing in the street to festive music took place and joy was expressed by all and lasted almost an hour.  When Rick finally arrived to greet his bride, the ladies on Sahana’s side welcomed him.   His arrival was cause for great cheer and excitement as they exchanged garlands around their necks. For the next three hours, the wedding ceremony took place which included many sacred rituals and traditions.

Groom is brought to the Bride during Baraat

The bride and groom sat on a swing while ladies sang songs and celebrated their union.  Women threw turmeric colored rice to ward off evils.  Sahana’s father washed Rick’s feet and Sahana washed Rick’s parent’s feet.  Finally, Rick washed the feet of Sahana’s parents.  All this was overseen and led by a Hindu priest.  A betel leaf and areca nut as well as coconut figured prominently in the ritual.  Water was poured on the bride’s hand.   A holy fire was lit; the groom tied a sacred thread dyed with turmeric around the bride’s neck; they circled around the holy fire 4 times; they took 7 steps forward, each representing a vow.  (Note: at the Jewish ceremony, the bride circles the groom 7 times.) Other prayers and music follow; at one point the bride left to change clothes and the ceremony concluded with the entire assemblage coming to them and throwing yellow rice (with the right hand) and rose petals (with the left).  Finally, everyone walked up to and into the mandap, the beautifully decorated platform, where the married couple sat, to bestow blessings on their marriage. 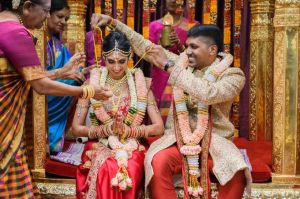 After this lengthy and meaningful ceremony, a sumptuous feast is served!  What a fabulous beginning for a new couple; and to think … in just 4 hours, the Jewish ceremony will take place!  Mazel Tov!

Bride and Groom under the Chuppa