When I was growing up, there were no opportunities for girls to participate in sports. The only “sport” that was acceptable for us in my high school was cheerleading. That wasn’t for me. Only in the summer, was I afforded the chance to learn, practice, participate in, and ultimately excel at certain sports. It was absolutely magical to have that hitherto forbidden world opened up to me.

Each morning of camp, the group leader would give each counselor a schedule of activities. These were regimented and scheduled, hour by hour, except for the rare “Free Time,” usually after dinner and before our Evening Activity. Many sports were incorporated into our daily activities: volleyball, softball, tennis, ping-pong and swimming were all offered and taught, sometimes expertly, sometimes less so, by our counselors. For me, volleyball was the sport I enjoyed the most. The most exciting thing for me was that even though I was short, I played a most capable Net position. I was a great jumper and could even spike!

I was on the Volleyball Team, which meant that I would be an official player when it came time to be put to the test. Twice each summer, we would have a serious competition against another camp, Kindering, (sometimes called Camp Circle). Boiberik was in Clinton Corners, NY, (near Rhinebeck) and Kindering was on Sylvan Lake, a good ½ hour away (I know, because I just passed both exits on the Taconic last weekend.) One month, we went to them; the other month, they came to us. In the bus, we would practice cheers and get ourselves all worked up for the big games. (“Give me a ‘B’, give me an ‘O’……)

In one noteworthy game, my serve garnered our team 9 out of the 21 points to win the game! Speak of self-esteem — I couldn’t have felt better! Competition was fierce. Players tense. Campers on the sidelines grew hoarse cheering for their teams. We went home exhausted. 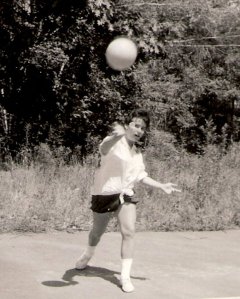 I often think about how much we offer girls today by way of sports, both in school, and on community teams. From gymnastics to lacrosse, soccer to softball, a girl so inclined has her pick. But, in my day, the only way I got to experience the joy, the camaraderie and the passion of being on a competitive team was through my summers at camp!