I’m back from San Francisco where my son, Lewis, threw himself a fun-filled 40th Birthday Bash for himself, which included a 5-hour private bus tour – he was the tour guide – through his favorite spots in the city. At our meet-up location at Fisherman’s Wharf, we chowed down on offerings from the local purveyors.

Our family enjoyed crab salad, raw clams and lobster bisque. After filling our bellies, we boarded the bus which was a 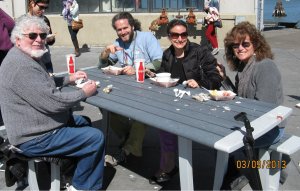 Chowing Down on Fisherman’s Wharf 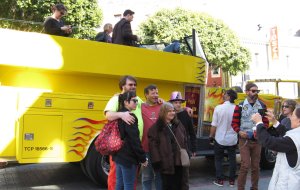 Our Own Tour Bus

camaraderie, fueled by a large basket of candy that was circulated within minutes of our boarding.

As we began to leave Fisherman’s Wharf, we were treated to a San Francisco happening: The Naked Bike Ride. I kid you not. What these dudes were celebrating or protesting I have no idea; signs were conspicuously absent (as was clothing) but they looked as though they were enjoying the sunshine and letting it all hang out.

Riding through the city, we spotted a long line of people awaiting the opening of a new store. No one on the bus could understand such bizarre behavior, nevertheless it was in progress. We commandeered the crowd to belt out the Happy Birthday song to Lewis, who proudly took the spotlight. 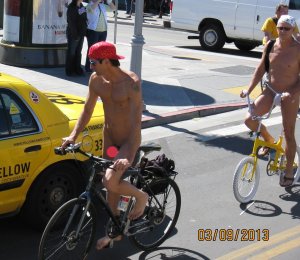 Next stop was Jack Kerouac Alley for an honest-to-goodness Poetry Slam with real poets! Of course, the experience would not be complete

without browsing through City Lights, the famous bookstore

founded in 1953 by poet Lawrence Ferlinghetti.

The sun was strong, the tour was great, Lewis was an informative and funny tour guide, but we were all getting a little hungry. Not a problem! Lewis had planned well. Upon arrival in Chinatown, he hopped out of the bus, returning with 3 large containers, each holding 60 steaming pieces of dim sum. Perfect! We jumped on the treats like tourists on a trolley. 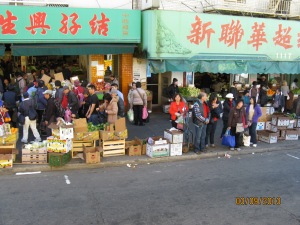 We Get Steaming Dim Sum from Chinatown 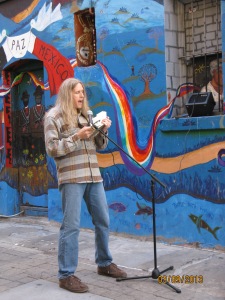 And what would a tour around a city be without me finding a misspelled sign? 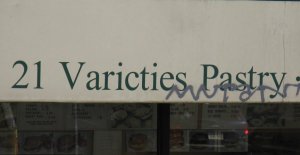 Thanks, Lewis, you planned and organized a great party for all of us! Same time next decade?