I love the type of puzzle that is simple to explain and understand. No frills, no complicated facts, nothing hidden. Such is this puzzle that I hope you find intriguing. 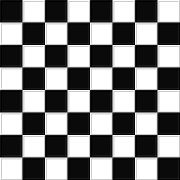 Picture a checkerboard, or better yet, go get one. You know, 64 squares, alternating in color, usually black and white. Now get some dominoes or, lacking them, cut out a few paper rectangles where each covers two of the checkerboard’s squares. Here’s the question:

the top right and bottom left squares remain uncovered? Simple yet challenging. Scroll down for the answer.