We all use computers but how many of us are confident with the definitions surrounding the technology? After all, those of us who grew up with floppy disks started out confused. Those “floppy” disks felt hard when you handled them. Could there be more confusion? Not with the following list to help you get started. Pay attention! 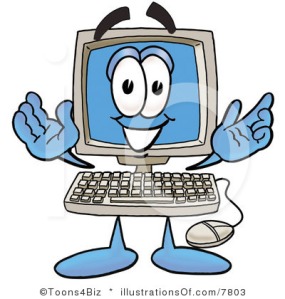 ALPHANUMERIC: the ultimate destination of the Enterprise as outlined in Captain Kirk’s starship manual.

COMPILER: the machine used by doctors who specialize in infertility, used to extract and store semen for future use.

INPUT/OUTPUT: not content with normal usage, and being unable to come up with some fancy-shmancy words for “put in” and “put out,” some nerds merely switched the order and congratulated themselves on some “new” hi-tech words!

DATA: This can mean almost anything; the important thing is how you pronounce it. DATA (rhymes with “matter”) shows you went to Harvard Law School; DATA (rhymes with “later”) indicates you know next to nothing about anything, but most everything about something. Those who use the word “info” really have their act together.

DOS: an exclamation you hope is made by your envious friends upon seeing your computer set-up: “Dos nice!”

ANALOG: “How do you start a fire?” “Use newspapers, kindling, analog.”

SOFTWARE: What happens to your hardware if you place the computer too close to a heat source.

USB PORT: Do not use Unless Something Breaks.”

MOTHER BOARD: This is the key to the whole thing! If you’re good to your mother, it will pay you back in a kinder, more compassionate computer.

If you’ve read this far and haven’t learned anything new, you can look forward to “A Hundred Days to a Better Vocabulary with the Metric System” in which you will be introduced to the idiom, “Give him a centimeter and he’ll take a meter!” And you’ll learn that a gram is your mother’s mother, but only if she is shorter than 5’1” – that’s 155 cm for those of you who haven’t fallen asleep yet.