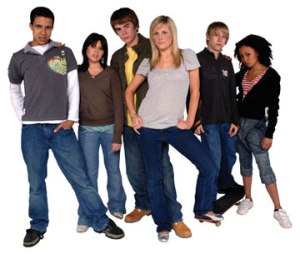 My family knows me as a woman with a mission; that is, if I get it into my head to right a wrong, woe to anyone who stands in my way. Teenagers, whose very beings are infused with the “We’re special!” attitude, are frequently the targets of my “correction.” I’d like to share two stories with you and welcome your feedback. Waddya think? Am I to be cheered for my strong morals or labeled as a nutcase?

Case number one: I was driving in town, a car with a teenage driver and her friends in front of me. Suddenly, I saw her toss an

empty pack of cigarettes out the window. When we stopped at a traffic light, I hopped out of my car and approached the careless driver. “Where do you think you are?” I asked her, “This is our lovely suburban town. We don’t throw trash out the window.” She looked at me as though I had two heads. Clearly, she had never before been challenged in this way. Ignoring me, she turned to her friends. I persisted in chiding her and she finally gave up and said, “What do you want me to do?” I said, “Turn around and pick it up.” Only after assuring her I would go to the police with her license number, did I watch as she made a U-turn and retrieved the trash. Victory!

Again, while driving locally, I was behind a car whose driver dumped a McDonald’s bag with the detritus of her leftover meal out the window. I followed her to her destination and watched as she parked her car. I then retraced the route, retrieved the bag and returned to her car. I placed the bag that she had discarded so wantonly on top of the hood.  I hope she thought about it when returning to the car but I doubt it.

I dunno. Maybe it’s the teacher in me, maybe it’s the mother. But I cannot stand by for such wanton middle finger treatment.

Perhaps if more of us take an active role in insisting on civility on the part of the slobs, we will see some results.

Then again, maybe not.

A Blog of the Ridiculous and Sublime, by Mark Sackler