While I have been thinking about this topic since last year, it’s taken me this long to form my thoughts into a coherent, politically-correct piece so as to not offend anyone.

When someone wishes me a “Merry Christmas!” I’m often conflicted. It’s equivalent to going up to a Buddhist and wishing him Happy Passover. Do I smile and say, “Same to you!” or let them know it’s not Christmas that I celebrate. I usually opt for the latter, replying, “Thanks, it’s not my holiday but Merry Christmas to YOU!”

Now, don’t get me wrong: I love the lights, the trees, the fa-la-la and ho-ho-ho of Christmas. The camaraderie, peace and joy that are spread. The caroling. The free cookies and glasses of wine in the stores. The look on children’s faces when they see Santa at the mall. I love helping friends decorate

their trees. Christmas is, indeed, a big deal to Christians. And rightly so. It is, after all, the celebration of the birth of Jesus Christ, the icon of their religion. Chanukah, on the other hand, is a minor Jewish holiday. To put it in

perspective, it’s certainly not as important to us Jews as Passover, Rosh Hashonah or Yom Kippur when strict religious ceremony and food restrictions are observed and many attend synagogue.

When I was teaching, many of my students thought that Chanukah was the “Jewish Christmas.” The confusion, of course, comes because of the confluence of the holidays. I would spend a few minutes explaining that Chanukah commemorates a documented historical event when, against all odds, a small band of Jews overcame the mighty Syrian oppressors who sought to convert all Jews to Hellenism. In other words, a military victory.

What I don’t like is when the stores gear up for Christmas right after Halloween and the menorah is displayed only after some Jewish employee reminds someone that Chanukah began yesterday. Last year, in my local Y, the day Chanukah ended, the menorah disappeared. As of Dec. 31, the tree and wreaths were still there! 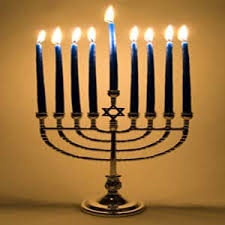 The Holiday of Lights

Speaking of the Y, the best greeting I heard last season was “Merry Fitness!” Now I like that one. It has a permanence to it that I can cotton to.

Oh, and not to omit the spelling: does it start with a CH (like you’re clearing your throat) or an H? I favor the CH. Like other languages, Spanish, for example, with its ll as in llama, Hebrew has letters not seen (or heard) in our language.

So, to all my readers, Happy New Year (you can’t go wrong with that!) and, as a Jew, I get to say that again at Rosh Hashonah (but not to non-Jews, of course)!