Last May, on one of my final commutes to the school where I was teaching, deep in thought about polynomials and other things mathematical, something out of the ordinary happened to snap me out of my trance.  Suddenly, as I was moving along with the flow of traffic on the well-traveled route, the car in front of me came to an abrupt stop.  Likewise, traffic on the other side halted as well.  Miraculously, not a car horn was honked, no one stuck his head out a window to yell, “hey…,” and not one person exhibited road rage.  There was no loss of composure among the harried commuters who were so inexplicably stopped on their way to work. 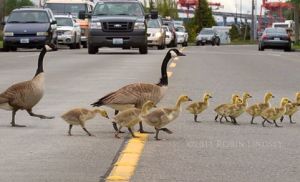 Stay all together, now, fellas!

Instead, I saw smiling faces and looks of joyful serenity on the drivers.  For there, crossing the road, was the reason for the delay.  A family of geese — momma and poppa and their six new babies — were traversing the road.  The lead parent was clearly hurrying and,  if I can project, a little nervous, but he deftly led his family to safety, secure in the knowledge that, at least for as long as needed, traffic stood still.

We all proceeded on our way after the family was safely across.  And maybe — just maybe — some of us thought about what we had just seen during our busy commute.  In these days of instant messaging and e-everything, we can still take the time to let nature’s creatures cross the road.  And we can do it without grumbling, without alarm and without a rush.  Just like in the old days.